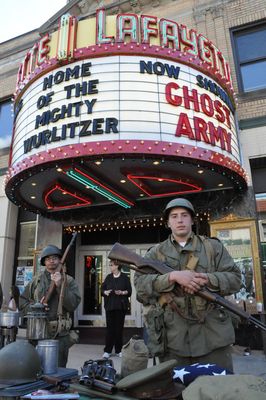 The marquee of the Lafeyette Theater in Suffern, NY, for a September benefit, with WWII re-enactors in attendance.

2011 was a big year for The Ghost Army film project. After seven years of effort, the film is very nearly done, and I have set a final deadline for its completion:

Here is an update on our many 2011 accomplishments, and a request that you consider a year-end donation to help finish the film with the quality it deserves.

We raised $38,728 this year. More than 400 people gave in 2011! To date we have a total of $158,194 raised in support of the film, every single penny from individual donors. You’ll be amazed at how we stretched every one of those pennies. Read on:

We expanded the traveling Ghost Army museum exhibit, and displayed it for five months at the Historical Society of Rockland County, NY, which has been an invaluable advocate for the project. Liz Sayles did a beautiful job curating the exhibit.

We have honed the rough cut, which now runs 62 minutes. As many people have pointed out, it is not so rough any more!  It received rave reviews from the audience at a September benefit screening at the Lafayette Theater in Suffern, NY.

Here’s a sample of their comments:

“The rest of America needs to see this!”

“Entertaining, humorous, and a real tribute to the creative efforts of The Ghost Army…Bravo!”

“I think it will inspire the creative youth of our country!”


Sotheby’s and Spire Fine Art Printing helped us produce a 48-page visual history of The Ghost Army with more than 200 images. (Cover below.) Co-author Liz Sayles did the gorgeous layout. The book, entitled Artists of Deception is currently available on Amazon

We obtained all of the high-resolution WWII era footage needed for the film. This was an important milestone, requiring a major expenditure, but its value can be seen in the comparison below. Check out the difference between the low-res film used in the rough cut, and the final high quality version we now have in hand for the final cut.

In November, we interviewed Major General George Rebh (Ret.), the most senior surviving Ghost Army officer. As a captain in WWII, he commanded the 406th Combat Engineers, one of the four sub-units of The Ghost Army. George (seen in the then-and-now photos below) lives near Washington, DC, and is full of vivid recollections from the war years. It was a remarkable experience to capture his unique perspective on the unit.

I pledge to finish the film by June 30, 2012. Currently we have no TV deal, but German Public Television (ZDF) remains interested, and I am still trying to snag a US partner. If we don’t have a TV deal by summer, I will enter the film in selected film festivals to raise its visibility and possibly secure a limited theatrical release. My back-up plan is to tour the film around the country myself. Whatever it takes, we will get this seen by as many people as possible!

To finish the film we need at least $44,000. That is an absolute barebones budget--so lean that it doesn’t cover any overhead or pay for my own time.

The money will pay for the following:

Your generosity has brought us this far, so close to completing The Ghost Army. Some of you  have donated time after time. I am incredibly thankful for your commitment to telling this story. You are the people who have said YES, and I can't begin to express how rare and wonderful that is. In the spirit of the holidays, I hope you’ll consider helping us one more time by making a tax deductible year-end contribution to see this film through to the finish!


Checks can be made out to The Center for Independent Documentary with the words "Ghost Army" on the memo line and mailed to:

If you have any questions or suggestions, please email me at rick@ghostarmy.org . Or you can post on our Facebook Page

Thanks once more for all your help and support. Have a joyful holiday season.