«back to previous gallery 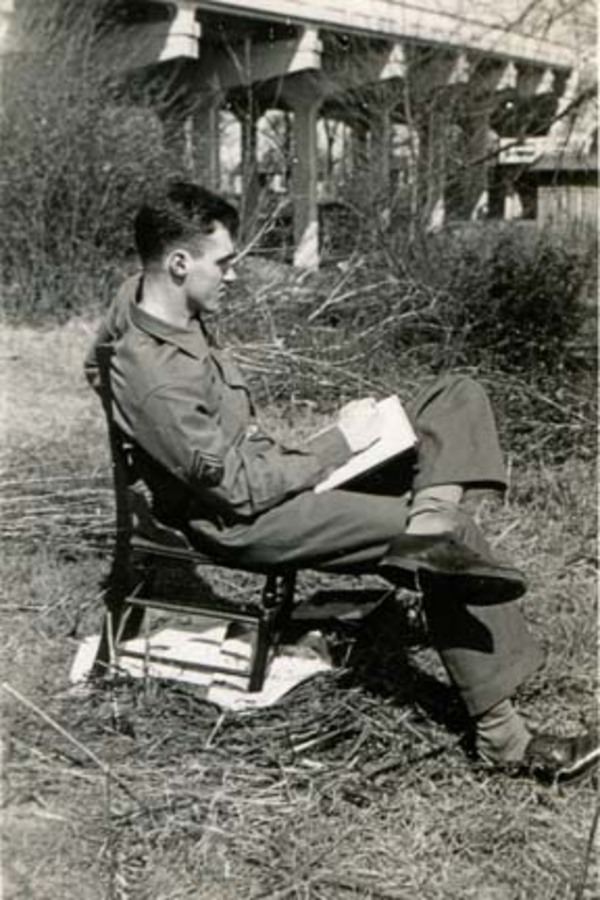 My father, Tony Young, passed away two years ago.  Among his prized possessions, we found his Army papers, including photographs of some of his unit, paintings and drawings that he did during his time in the classified unit called the “Ghost Army.”

He enlisted in this special unit after seeing a notice in October, 1942 that the military was looking for artists to become part of a special unit.  Working for Peoples’ Gas at the time, and working on commercial art as a sideline, he qualified.  He traveled to Ft. Mead, Md where he began his training and was joined by his bride-to-be, Erika Schmidt.  They were married at the Camp Chapel on February 2, 1943 with Bill Blass serving as his best man (see photo).

He was very proud of his military service and his time with the 23rd, but rarely shared specifics about it until later in his life.  He told a story about deceiving the Germans by making a unit appear to be larger than it was.  They did so by driving through the small town not far from their position.  They rode right down main street and when they got to the end, they circled around, changed the markings on the vehicles and their uniforms to indicate that they were part of a different unit and rode through the town again.  Having done this, it looked like more than one unit was going through.  In reality, it was the same one - just changing their identification over and over again.

He also shared that they were once assigned a mission to go into a local tavern in a small town where there were known to be German spies. And, appearing to be intoxicated after a while, - they were to pass on erroneous information about the location and plans of their unit.

He also spoke of a member of the French Resistance who was especially kind and generous sharing some of his food with them.

My sad regret is the my Dad died before we became aware of this wonderful project.  However, I know my Dad is smiling down at the prospect of completing this film