THE GHOST ARMY won the Audience Award at the Salem Film Fest last night. It was voted the best film at the documentary festival (out of 31) by audience ballot. The film played to two sold out screenings at the festival, which brings documentaries from all over the world to Salem MA.

More than five thousand people attended films at the 6th annual Salem Film Fest, an audience increase of 23% over last year.  The award is a one-of-a kind sculpture by Salem artist Mik Augustin. bringing to life the festival's slogan, "Come to Salem. See the World." 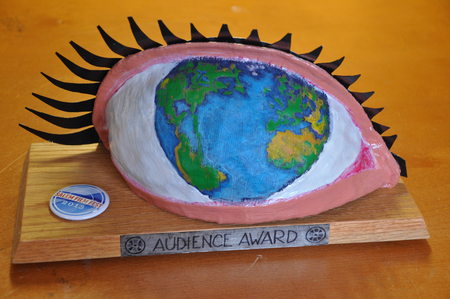 "I am truly overwhelmed.  Thank you to all the audience members who voted for this story about an extraordinary group of WWII veterans, and thanks as well to the festival organizers for putting on such a wonderful event!"
-Rick Beyer

The Ghost Army  has also been selected to play in May at the GI Film Festival  in Washington DC, and will air on PBS on Tuesday May 21, at 8 PM.