WASHINGTON, March 9, 2016 /PRNewswire-USNewswire/ -- A bipartisan group of congressmen is fighting to gain long-overdue official recognition for veterans of an extraordinary WWII deception unit known as The Ghost Army. The campaign builds on the efforts of Boston area filmmaker and author Rick Beyer, who has worked for more than a decade to bring attention to the unit. This little known group of soldiers used inflatable tanks, sound effects, and illusion to fool the Germans on the battlefields of Europe, risking their lives to draw fire away from their fellow GIs.

Representatives Annie Kuster (D-NH) and Peter King (R-NY) have introduced a bill to award a Congressional Gold Medal to the unit. More than 30 representatives from both parties have signed on as co-sponsors of H.R. 2170, "The Ghost Army Gold Medal Act." (https://www.congress.gov/bill/114th-congress/house-bill/2170)  Similar legislation will be introduced soon in the Senate. 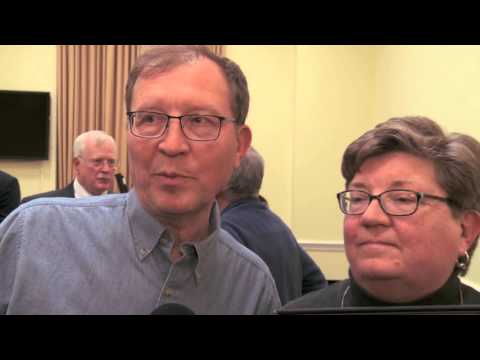 A Capitol Hill screening of THE GHOST ARMY hosted by Rep. Annie Kuster, in support of the campaign to award a Congressional Gold Medal to The Ghost... People can ask their congressman to co-sponsor the bill by visiting:https://ghostarmy.com/initiatives/f/c/835#what.

"I am incredibly proud to sponsor this bipartisan bill," says Representative Kuster, who serves on the Veterans Affairs Committee. "I urge all of my colleagues to join me in working across the aisle to convey our overdue appreciation to these brave Americans, whose critical accomplishments remained a secret for decades."

Representative King serves on the Homeland Security Committee. "It is finally time that the American people recognize their ingenuity and selflessness which saved countless American and Allied lives," he says "They deserve their due."

The Ghost Army carried out 21 battlefield deceptions from June 1944 to March 1945.  They often operated on or near the front lines in order to divert enemy attention away from actual units. Three of them were killed and dozens wounded, but they are credited with saving thousands of American lives. Learn more athttp://www.ghostarmy.org.

Beyer began researching the unit in 2005. This led to his 2013 PBS documentary The Ghost Army and the 2015 book The Ghost Army of World War II, co-authored with Elizabeth Sayles.  "This is one of the most compelling stories I have ever come across," he says. "Using creativity to save lives – amazing!"

Hollywood seems to agree. American Sniper producers Andrew Lazar and actor Bradley Cooper have optioned the book and documentary, and are working to bring the story to the big screen.

A Sense of Urgency

Rep. Kuster recently hosted a screening and discussion of Beyer's documentary on Capitol Hill to draw attention to the Gold Medal campaign. Among those attending was Robert Dahl, whose late father Harold Dahl served in the unit, and he feels a sense of urgency about the campaign.  "There's so few of them left, so having some of them still alive when that recognition happens is really important."

Beyer is in touch with surviving Ghost Army veterans in Alabama, Connecticut, Florida, Illinois, Louisiana, Massachusetts, Ohio,New York, New Jersey, Pennsylvania, Utah, and Washington D.C. They are grateful for the effort to gain them recognition. "It's wonderful, but a little bit embarrassing," says John Jarvie of Kearny New Jersey. "I don't really go in for a lot of patting on the back, but I feel very honored." Jarvie treasures a remark by a friend who served in one of the units that The Ghost Army impersonated. "You know John, if your unit hadn't been there to cover for us, I might be dead."

The Congressional Gold Medal has been awarded to other unsung WWII units including The Doolittle Raiders (2015), The Monuments Men (2013), Women Air Service Pilots (2010) and the Native American Code talkers (2008). "The dangerous, life-saving, top-secret work of The Ghost Army is well deserving of similar recognition," says Representative Kuster.