Bill Sayles served in Company B of the 603rd Camouflage Engineers. He attended Pratt and studied advertising. After the war he shared a New York City studio with fellow Ghost Army veteran Arthur Shilstone. He had a long career as an art director and book illustrator. One book, Macrame: An Introduction, sold millions of copies, and Bill found himself being interviewed by Barbara Walters, who admitted to using the book to learn how to macrame. 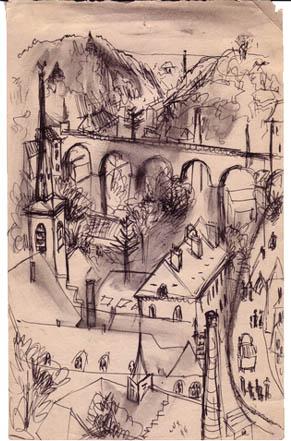 This is one of a number of sketches Bill made during the war. Bill was interviewed for the film in New York City on July 19, 2006.
Tweet Share on Tumblr