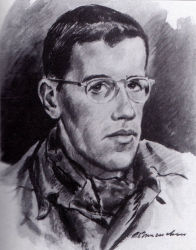 One officer who threw himself into the deception mission with enthusiasm was Captain Fred Fox. Fox was a 1939 graduate of Princeton, where he was a member of the Princeton Triangle Club, the oldest collegiate musical-comedy troupe in the nation.

While at Princeton, Fox was certainly aware of, and may have been  involved in a deception that foreshadowed his time in the Ghost Army. In the fall of 1935, a group of fellow freshmen secretly created a fictitious classmate, Ephraim di Kahble, out of whole cloth. They rented and furnished a room for him in a boarding house, then took out strange advertisements in the Princetonian under his name. Someone portraying Di Kahble even conducted a telephone interview with a New York newspaper. Eventually Di Kahble was revealed to be a hoax by the New York Times.

Fox’s flair for the dramatic served him well in the 23rd, where he believed it was critical that everyone fully embrace the deception mission. After preliminary operations in France, he wrote a memo that was put out under the name of Col Harry Reeder, the unit’s commander.

The attitude of the 23rd HQs towards their mission is lopsided. There is too much MILITARY and not enough SHOWMANSHIP.

Like it or not, the 23rd HQ must consider itself a traveling road show ready at a moment’s notice to present:

The presentations must be done with the greatest accuracy and attention to detail. They will include the proper scenery, props, costumes, principals, extras, dialogue, and sound effects. We must remember that we are playing to a very critical and attentive radio, ground, and aerial audience. They must all be convinced.

According to fellow officer Bob Conrad, Fox was a key mover behind the improvised Ghost Army deception technique they called “Special Effects.”

Fred Fox said: Why don’t we put a stencil of the name of the unit that we were simulating, right on the trucks? And why don’t we start a counterfeit shoulder patch factory, where they would see we’re with the 75th Division (one of the divisions we did). And so forth. And the brass, were against it. But after Fox had been haranguing them for, I think, several weeks, they went along markers, things of that kind.

Fox secured permission for them to create phony command posts and the impersonate high ranking officers. "Anything" as Fox himself said, "to fool the enemy ground agent." 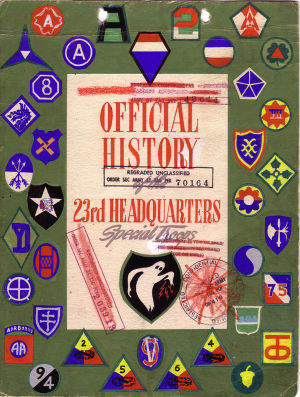 At the war’s end, Fox wrote the official history of the 23rd for the US Army. (There is also evidence to suggest that he designed the logo on the cover of the history.) In certain spots a reader can almost see the twinkle in his eye. Here’s a typical Fox turn of phrase.

Further on in the history he touched  on an incident remembered by almost every member of the unit.

“By clever manipulation, the 23rd was able to garner 520 cases of cognac. This was enough liquid to drive one jeep 22,000 miles if Cognac would explode. And don’t think it wouldn’t. So this bivouac area is referred to as "Cognac Hill."

Fox revealed his sensitive side when he wrote about their December1944 retreat during the Battle of the Bulge, when they withdrew to Verdun, scene of the bloodiest battle of World War I.

Verdun is a depressing city filled with a million ghosts of other unhappy soldiers. That makes it much too crowded... It is hard to celebrate in dreary, cold, unlighted barracks, especially when neither liquor, victory, home nor girls are available.

Fox’s ends his official history with these words:

On 30 August, Army Ground Forces wrote SECOND ARMY that the 23rd was to be deactivated by 15 September. Its ashes were to be placed in a small Ming urn and eventually tossed into the China Sea.On 10 September the 23rd Adjutant told your 87-pointed historian that the only thing that kept him from being released was the completion of this story. So now it’s done and tomorrow I will be a free man again.

After the war, Fox became a minister. In 1956 he went to work in the White House, serving as a Special Assistant to President Dwight Eisenhower. While there, Fox sought to get the Ghost Army’s story declassified, so that he could write a book about it. But the Army refused, and it remained classified until the 1980’s.

Always a dyed-in-the-wool Princeton man, he went to work for the university in 1964, becoming its  “Keeper of Princetonia” in his words, and “its number one cheerleader” according to his classmates. Fox died in 1981.