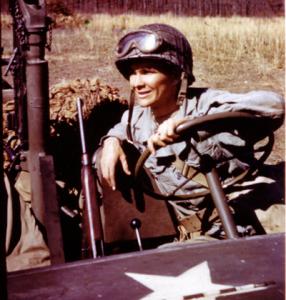 John Jarvie served as a jeep driver in the 603rd Camouflage Engineers. He studied art at Cooper Union before the war. His wartime art fills several three-ring binders, and captures everything from bombed out churches to busy brothels, from Russian refugees to weary soldiers in the rain. He eventually became the Art Director for the in-house ad agency for Fairchild Publications, owner of Womens Wear Daily.  He lives today in Kearny, New Jersey. 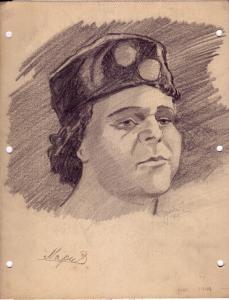 In Luxembourg, and later in Trier, Germany, the men of the Ghost Army came across many Russian refugees whom the Germans had imprisoned or enslaved. In the parlance of the time they were known as   "Displaced Persons."  Some of the most moving portaits painted by artists in the unit are of those refugees, may of whom are believed to have been executed or sent to the Gulag once they were repatriated to the Soviet Union. This is a woman who Jarvie knew only as "Mama."