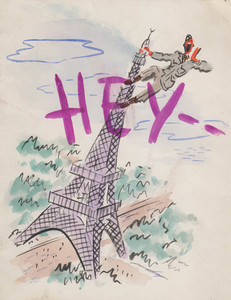 New York City - They were young artists given the job of fooling Hitler’s legions. In their spare time they never stopped painting and sketching. Many went on to illustrious post-war art careers, like fashion designer Bill Blass, minimalist painter Ellsworth Kelly, and wildlife artist Arthur Singer. Now a special two-week exhibit at the Salmagundi Art Club brings together original wartime works from nineteen of these soldier/artists, including three rarely displayed pieces by Ellsworth Kelly.

The men were part of a top-secret unit that used inflatable tanks, sound effects, and illusion to deceive the Germans on the battlefields of Europe. The 1100 soldiers in the 23rd Headquarters Special Troops impersonated other, larger American units to fool the Germans about the size and location of the troops facing them. They became known as The Ghost Army.

“...the age-old skills of painting, drawing and making things helped win World War II, highlighting one surprising way art and artists have proved their value during times of crisis."

The Ghost Army of World War II” includes landscapes, portraits, caricatures, cartoons, and rough sketches, done in watercolor, pencil and pen. and ink. All bring to life the period from June 1944 to May 1945, when The Ghost Army was in action in Europe.

“We were sleeping in hedgerows and foxholes. But nothing kept us away from going someplace to do a watercolor.”

The exhibit is co-curated by Rick Beyer and Elizabeth Sayles, authors of the new book The Ghost Army of World War II, published by Princeton Architectural press. (Most of the art from the exhibit as well as numerous other pieces are reproduced in the book.) Sayles grew up hearing stories about the unit, since her father, Bill, was one of the deceivers. Beyer has been researching the story for ten years and produced the 2013 PBS documentary The Ghost Army.

There will be an opening reception and book-signing on Sunday, June 14 at 2 PM. On Thursday June 18 at 7 PM there will be a screening of The Ghost Army documentary followed by a panel discussion including Beyer, Sayles, and two Ghost Army veterans whose art is part of the exhibit: John Jarvie and Jack Masey.

The Salmagundi Art Club is located at 47 Fifth Avenue, New York. Information on gallery hours and admission prices at www.salmagundi.org or by calling (212) 255-7740