This group handled radio deception, also known as spoof radio. Operators created phony traffic nets, impersonating radio operators from real units. They learned the art of mimicking an operators method of sending Morse Code, so that the enemy would never catch on that the real unit and its radio operator were long gone.

"Radio was the stage setter. Were the silent orchestra underneath the musical on the stage. When you think of the 23rd Special Troops, you think of the inflatable tank, or the sound guys. And theyre great. But they have to have a stage on which to perform.  And we provided that stage. We painted a picture for German intelligence,in their mind, as to what was going on."
"Spike" Berry, T4, Signal Company Special.

"Could I have sent just one radio message that changed the tide of battle, where one mother, or one new bride was spared the agony of putting a gold star in their front window? That's what the 23rd Headquarters was all about."
-Sgt. Stanley Nance, Signal Company Special 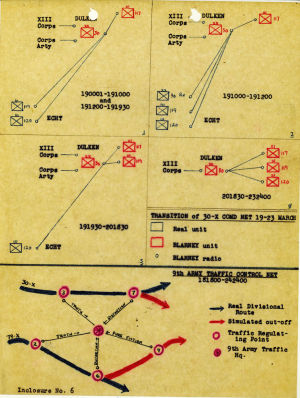 This is the radio plan for Operation Viersen, the Ghost Army's last deception.